Hopefully you have Journey stuck in your head now. For that, you are most certainly welcome.

So normally for the Super Bowl, I am cooking up a storm. This year, as I mentioned in a previous post, we played it low-key. But I couldn’t watch the game without making something tasty to go along with it even if my team lost! I have been a long time fan of a certain food blogger many of us know and love…and she featured a recipe that just screamed “game day food” to me – slow cooked pulled pork.

Oddly enough, living in a city that prides itself on barbecue (of the pork variety) – there was no pork shoulder available in my grocery store. So after pacing the aisles and having the hubby quite annoyed at my lack of a back-up plan, I just went for the beef roast. And I must say it did not disappoint! 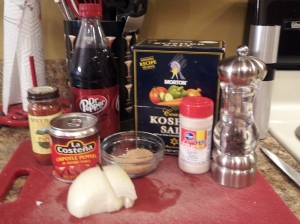 1/3 cup barbecue sauce (not pictured, would add this next time)

Serves 8-10 depending on size of roast.

Season both sides of the roast with salt, pepper, garlic salt and smoked paprika. I gave each side a light dusting of each and pressed it into the meat. If desired, trim some of the fat from the outside (fewer points and there is still plenty in the roast for flavor). 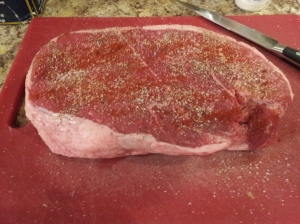 Turn your slow cooker on low and set for 7-8 hours. Chop your onion half into large pieces and scatter on bottom of slow cooker. Add roast on top. Pour chipotle peppers in adobo sauce on top (note: I used about 6 ounces in the photos and it was just too spicy – and I have a pretty high spice tolerance!). Pour barbecue sauce on top of the roast and then pour Dr. Pepper over the top.

Place lid on slow cooker and cook 6-7 hours on low setting, flipping every 1 1/2 hours. At about 6 hours, I cranked it up to high for about an hour to get the meat really tender so that it was easy to shred (we were competing with an exciting game AND commercials) – but I’m sure it would be fine leaving it longer on low if you’re making this while you’re at work or something! Once beef is tender, turn slow cooker off and remove meat, setting aside on a deep baking sheet for shredding.

Now here’s what’s great about this recipe – there are so many options at this point! My dad and mom made sandwiches with the shredded beef topped with cheese. The hubby and I made tacos with shredded cheese, lettuce and tomatoes (well, he didn’t have tomatoes, I did). 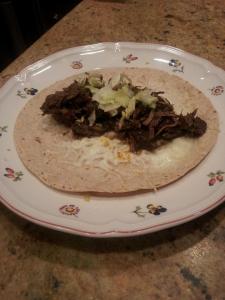 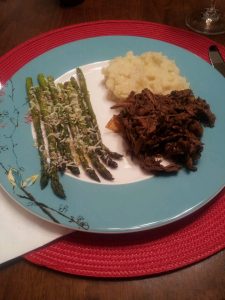 For leftovers – we had shredded beef with mashed potatoes and roasted asparagus. I really want to try the shredded beef on a baked potato with some sharp cheddar and extra barbecue sauce drizzled on top. Anyway you want it…that’s the way you EAT it.

(I’m honestly laughing at the rest of the parody to the song I am now singing in my head. It’s a gift I tell you!)